Just like Ismaïl Fattah Shakir Hassan had a lot of here not mentioned one man and group shows and participated in prestigious Biennials and Triennials, e.g. Sao Paulo, New Delhi and Venice. As co-founder of the 'Group of Baghdad of Modern Art', 1951, he called for an equation between traditional heritage and modernism. Before graduating in painting in 1954 at the Institute of Fine Arts in Baghdad, in 1948 he had already obtained a B.A. in social science. As a result of 'his research into the Islamic past he was able to develop a style which incorporates indigenous and international trends' Folk-art and legends had his interest. 'After his return from Paris he became an abstract painter with a mystical and contemplative aura. His symbols comprise wall cracks, graffito, numerals and Arabic letters.' [1989 Wijdan Ali, 'Contemporary Art from the Islamic world' p.161]. 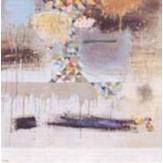 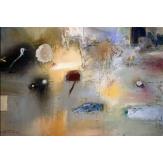