Included the before mentioned Biennials and Triennial Fattah had a multitude of one man and group shows. In Italy he was awarded with three and in Iraq with many prices. Public buildings and squares in Baghdad are adorned with Ismaïl Fattah's often colossal works and murals, e.g. 'The Martyr Monument', a combination of Islamic aesthetics with Western skill and technology Hewas considered the best Iraqi sculptor. Early already he had been influenced by the English sculptors Henry Moore and Kenneth Armitage. Also surrealism and Freuds interpretation of dreams had their impact and the thin, small, rectangular statues from Sumerian time fed his technique and his imagination. Comparable marks characterize his paintings. 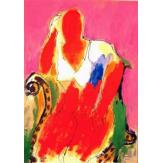